Laney Lu and the Hair that doesn't Grow

Laney is 2.5 years old now, and she has the same hairstyle practically as when she was born. It dumbfounds me how her hair just does not grow. Especially in the front. I recently trimmed the very back of her hair, just to even it up a bit. But I have never touched the front. And still, the hair just barely flutters on her forehead. Definitely no concern of her bangs getting into her eyes. At least her hair seems to be getting thicker, which is helping it lay down better. She used to be like a little chick, with her hair sticking straight up like downy feathers. For the most part, Laney will not let me put anything in her hair. I think it looks cute with a headband or even in little piggy tails that stick out from her head. But that look only lasts a couple of minutes before she pulls them out. Laney is still regularly called "he" or "your son." Oh well, at least it is better than long hair that is always in tangles!

My little sneak loves coffee. I went to gather the laundry and came back to find her in Will's room with my latte! She loves the "hot milk" and always asks for a sip. 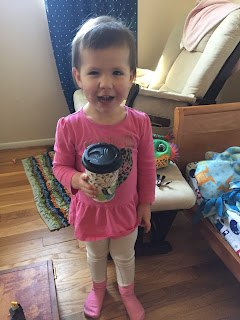 Last week at the park Laney fell at the playground and busted open her eyelid. Being a face wound, it bled like crazy and looked awful! The cut was pretty shallow, and the bleeding stopped quickly after I applied pressure, but the side were gaping. I debated on taking her to urgent care to see if it would need a couple of stitches. Mostly I was concerned because Laney is such a picker and won't leave scabs alone. I was afraid she would keep opening the wound back up. However, we decided urgent care would be more trauma than it was worth, so we just took care of it at home. Laney must have been really traumatized by the fall and blood, because she hasn't messed with it at all.  She actually left the bandaids alone for three days, and would barely let anyone come near her eye, much less pick at it herself. It is healing quite nicely and I imagine will only leave a small scar. When we went back to the same playground a couple of days ago, Laney refused to play on the equipment and only sat in my lap.  She said it was scary and she would "get blood again."  I was a little surprised because Laney has always been our rough and tumble, crazy daring girl. I've expected her to be the first one of the kids to need stitches. But this definitely slowed her down for a few days! 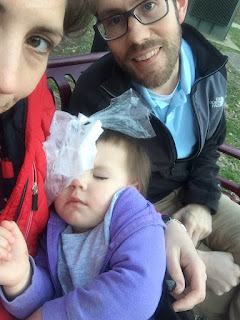 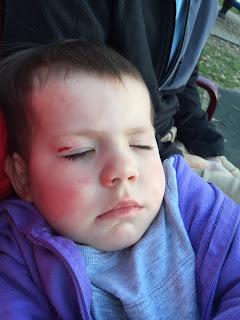