After Easter, our family took a little vacation to Nashville, TN to visit David's brother Ray who lives there.  His mom joined us for the week and his dad was able to come at the very end of the trip as well.  We had a pretty relaxed vacation.  I found an Airbnb condo to stay in that was very close to Ray's apartment.  This was the first time I had used Airbnb and was really happy with how well it went.  I liked having a little more space than a hotel room with two bedrooms and a kitchen but the price was really reasonable for Nashville.  The weather wasn't great - it rained almost every day we were there.  So we spent a lot of time laying around, taking naps in the afternoons, and hanging out with family.  One of my favorite parts of the trip was visiting the Nashville Zoo.  They have done a great job of having meandering paths through the zoo with lots of trees and shade.  The exhibits seemed almost more incorporated into a natural environment instead of just going from one cage to the next to look at animals.  The highlight of the zoo for Eliana was seeing the clouded leopard.


The next day we went for a little hike at Percy Warner Park that was just a 20 min drive from where we were staying.  It drizzled a little while we were hiking, but luckily the park had a great nature center that we visited while it was pouring rain.  Eliana, who is not always very excited about having to walk places, was surprisingly the group leader on the hikes.  She really enjoyed leading the way and pointing things out like when steps were up ahead.  William also did surprisingly well and only needed to be carried for a short time.  Laney spent most of the hike in the Ergo either eating or sleeping. 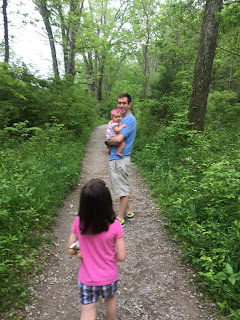 On Saturday Eliana, Ray, and I went to the Adventure Science Center while the little kids napped and David watch a soccer game (I think) on TV.  While it was not quite as fun as the Children's Museum in Indianapolis or COSI here in Columbus, there were some fun things to do.  Eliana especially loved the small dinosaur exhibit.

All went well until we left and were on our way to church.  Eliana suddenly declared that she could not find her new stuffed animal Black Spot the clouded leopard (from our trip to the zoo).  She had basically not put her leopard down since she got it at the zoo and was in tears that it had been lost.  She had tucked it inside her rain coat as we were leaving the museum, and it must have fallen out while we were running to the car in the pouring rain.  Ray quickly turned the car around and returned to the museum, but we could not find it.  I felt so bad watching the little tears roll down Eliana's face.  We devised a rescue plan - I reported the lost leopard to the museum with the hope that it would be returned.  A few days after our return to Columbus, the leopard was amazingly found (*on Amazon.com) and mailed to our house! The museum (wink, wink) had even cleaned the stuffed animal and repaired the small hole in the seam on one of the leopard's legs.  Eliana was overjoyed!  Black Spot has continued to be her favorite toy these days.

On our last day in Nashville, Ray and his parents prepared us an amazing brunch before our return drive.  We enjoyed the morning together, watching videos of clouded leopards and playing in Ray's apartment.  The drive home was quite long and Laney cried for much of it, but overall, we had a really nice time.  It was a great family trip.
Posted by Rachel at 11:40 AM No comments:

This spring I signed the kids up for weekly soccer lessons with Soccer Shots.  This was a skills class - they did not have a team or play matches.  I thought since they are just 2 and 5, the skills class would be better than an actual soccer league with games that involve little kids just swarming the ball. William has always liked kicking balls a bit more than Eliana, and his friend Paulo was signed up for the same class.  So I thought he would really like it, but I wasn't sure about Eliana.  She hasn't had that much interest in balls or sports before.  William was in the 2s and 3s class and Eliana followed immediately in the 4-6 year old class.

Eliana turned out to be the soccer star and loved the lessons!  William actually was a little scared or shy at first and didn't want to participate.  I spent the first 4 lessons trying to get him to join the other kids on the field, but all he wanted to do was sit in my lap on the sideline.  Finally I bribed him with a promise of a fruit snack treat at the end of the lesson if he would participate.  That did the trick!  He played the whole time and has been excited about soccer ever since!  Eliana has been one of the best players on the field during her lesson (not that I'm biased).  I'm sure it helps that she is one of the tallest and oldest players.

David, as you can imagine, was quite excited about the lessons (actually it was his idea to sign them up).  When he was on his inpatient service, he would try to get Mondays off just so that he could watch them play.  Unfortunately, most of the lessons he saw were the ones where William didn't want to play.  Oh well, I took some pictures so that he could see what a star William is now.  Probably one of the reasons Eliana has been so excited about playing is because of her daddy's love of soccer.  They will often watch Arsenal play on Sundays together.  Eliana told me that she either wants to be a goalie or she wants to be Arsenal (??? - I didn't realize Arsenal was a position...).  I might try to see if there is an actual league to sign Eliana up for next school year.  I think she would really enjoy it, as long as the uniforms are yellow (Arsenal's color).

Just a quick prayer request for David.  He has started his Heme Consult service, and it is extremely busy and stressful.  Tuesday he left for work at 6:20am and returned from work at 11:30pm.  The kids didn't see him for two whole days straight because he wasn't home while they were awake.  I don't think I have ever seen him so stressed before.  He works so incredibly hard and then comes home and gives so much here to his family.  He barely has a chance to catch his breath.  So big prayers that all his sleep counts as double (since he is just getting a few hours a night), that God give him strength to get through this service, and that God grant him wisdom to take good care of his patients.  Thanks and love from all of us!
Posted by Rachel at 10:01 PM No comments:

David and I both had Easter off this year, so we got to spend it with our families in Indianapolis.  First the kids and I dyed Easter Eggs at home.  It went much better this year than last although we still had several dropped and broken eggs.  My cousin Melissa also gave us two egg cartons full of blown-out eggs.  Because these eggs are hollow with a couple of holes in them, after they are dunked in dye, they drip water.  William thought it was like the eggs were peeing.  For several days after egg dying, he went around saying "I'm an Easter egg! I pee on you! Psssss!" 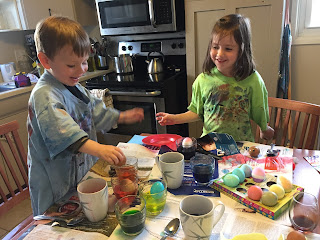 We spent Saturday with my family at a park, then the kids woke up Easter morning to find their Easter baskets! There was lots of candy, stickers, and gold fish! 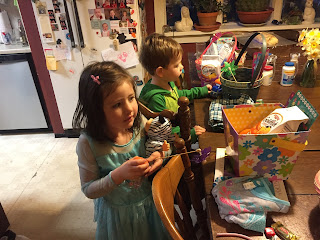 And for this post's episode of Who Wore It Best? 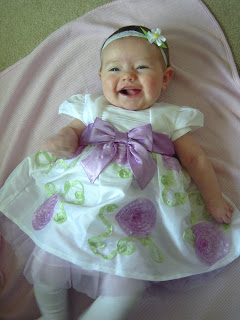 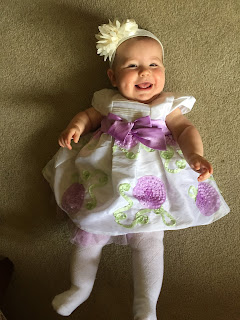 
After the egg hunt, we went to David's parent's house for some Easter ham with all of his family.  The kids really enjoyed visiting their furry cousins Mindy the dog and Tracey the cat.  We had a lovely time and enjoyed seeing so many family members.

Posted by Rachel at 1:24 PM No comments:

Every year Eliana's preschool has VIP night.  On this night, the school plans something special for the preschoolers to bring a parent or VIP to.  Last year was Carnival night, and David was able to attend with her.  This year VIP night was a dance.  Girls were supposed to bring their dads and boys were supposed to bring their moms.  Unfortunately, VIP night was in March, when David was super busy and worked most nights until 7pm or later.  When I told Eliana I was going to be her VIP, she was pretty upset.  "I already told my teachers I am going to bring my dad!!" she wailed.  I reassured her that I was allowed to go since her dad was working.  Eliana had to check with her teachers, but then was okay with the idea.  The dance was really cute and actually pretty fun.  They had an ice cream sundae bar and light up rings for all of the kids. Most of the girls were dressed up in fancy dresses, and all the kids were hopping around to the music.  Lucky Eliana got to bring along some extra special VIPs - her younger brother and sister as well.