David and I both had vacation the week before Memorial Day, so we spent some time relaxing in Columbus and then visiting family and friends in Indianapolis.  I really enjoyed our "staycation."  David and I went for a time trial on the Jesse Owens Stadium at OSU.  A time trial is where you run around the track to time yourself at a certain distance.  David ran three miles all at less than 7 min a mile while I ran 1 mile in 8:36.  Not too shabby.  We also visited the Olentangy Indian Caverns, hiked at Highbanks Metro Park, and went shopping at Easton Mall.  David and I also went to this fabulous restaurant for breakfast called L'Appat Patisserie and Cafe.  Didi, the owner of the baker, was amazing and super nice, and he and David were best friends by the end of breakfast.  The food was a mix of French and African and some of the best things I have ever eaten for breakfast.  David was practically jumping out of his seat trying to get some of the pastries from the case.  Bad news though.  Didi is closing up shop in Old Towne East.  He will be reopening sometime later this summer in Clintonville.  So it looks like if we want a repeat on breakfast, we are going to have to wait a while.

We got in town just in time for my dad's birthday.  We celebrated with some birthday chocolate pie. 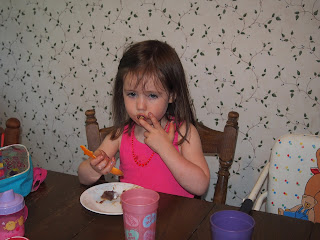 After spending some time on the southside of Indy, we headed up north.  I met with some friends in Carmel at Founders Park for a play date.

There is a lot of yelling going on at my house lately.  I feel like everything is an emergency all the time.  Eliana will be eating and drop her spoon, and yell, "My spoon!"  She will be sitting on the couch and yell, "I need a sip of water!"  She and William will be playing together, and they will start to scream laugh.  It is so loud!  We have been working with Eliana on being more polite, saying please, and using a better tone of voice.  She is definitely making progress.  And when she does remember to say "please", she asks, "was that better??"

William has also been yelling A TON.  He wants to be crawling, or more accurately walking, so bad.  He will be laying on the floor crying because he can't get to where he wants to go.  Then you pick him up and he smiles at you.  At second later, he is crying and throwing his body out of your arms to some other destination.  He just wants to get into everything and go everywhere.  I don't know what to do with him!  And when it comes to mealtimes, you would think I was starving that poor child, he cries so much.  He will sit in his high chair and just scream for food.  Half the time his mouth is still full with his last bite and he is still screaming.  It amazes me how much he can eat and the force with which he demands it.

Some days after the kids are in bed, I just want to sit in silence for a while and enjoy the lack of screaming.  Whew, kids are tough sometimes!

Just a regular Monday, hanging out at the park with friends.

I had a wonderful Mother's Day this year.  I had to work Saturday night into Sunday, but it turned out okay anyway.  When I got home from work, David had breakfast for me.  Then he took the kids to church while I took a nap.  When I got up from my nap, everyone else was napping (I found Eliana and David asleep on the couch watching soccer).  I got to just spend time with my babies while David did all of the work.  He made me dinner, cleaned up the house, and just made me feel really special.  Then the kids David gave me a beautiful wind chime to hang outside.  I would say it was a pretty awesome Mother's Day. 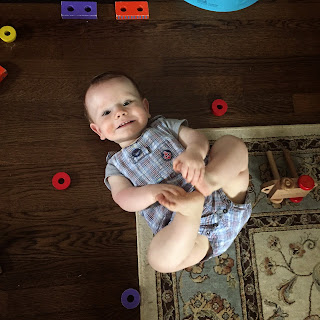 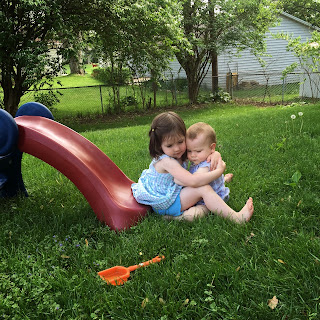 Posted by Rachel at 8:51 PM No comments:

Check out these curls!  When William gets sweaty or when I put sunscreen on him and it gets in his hair, his hair gets little curls!  I think it is so cute!  I cannot get over it! 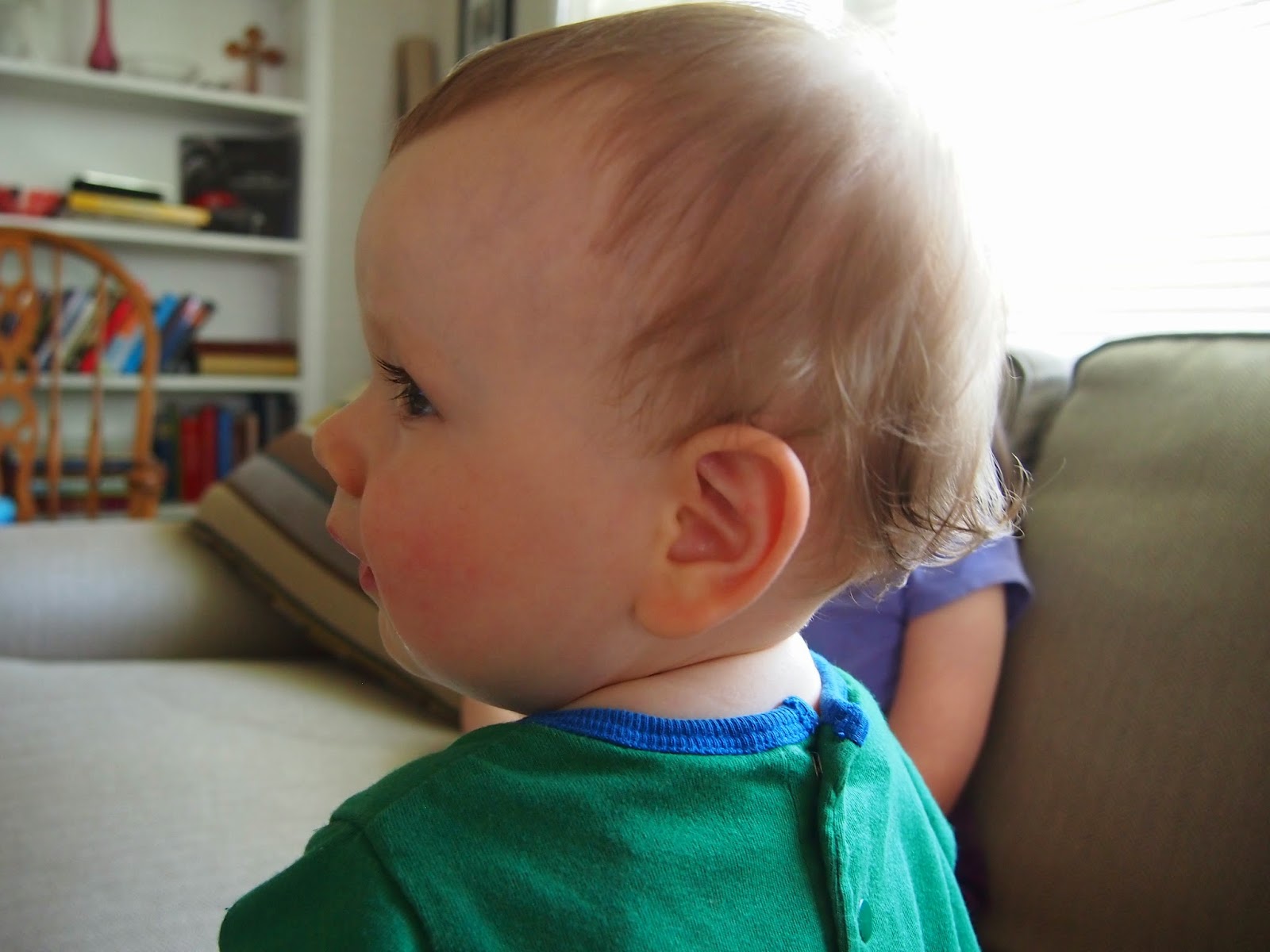 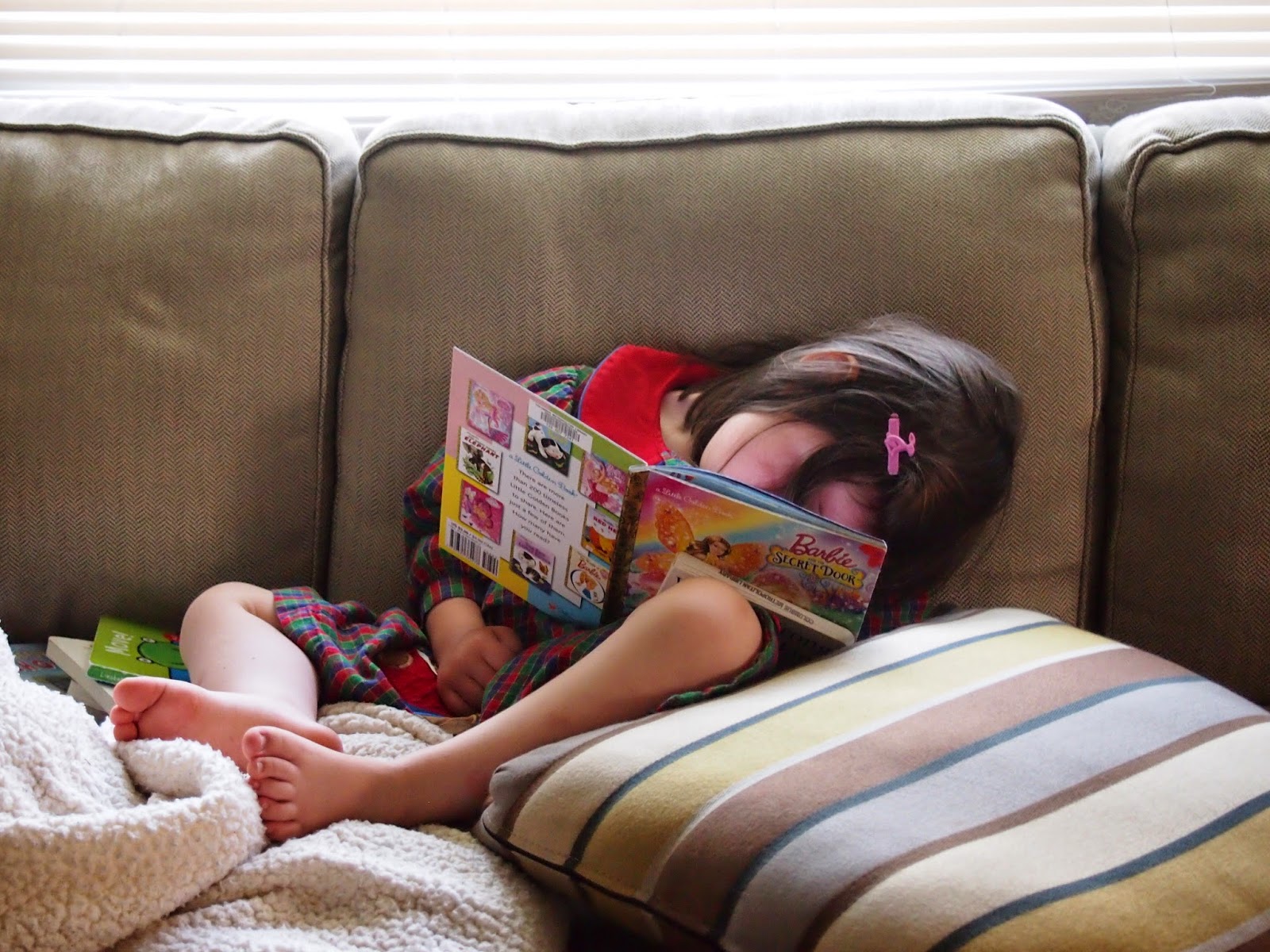 And then there is Eliana.  She doesn't take naps anymore, but she could really use them.  By the evening, she is always so tired and cranky.  I am at a loss of how to help her sleep better.  Today she was so tired she feel asleep on the couch right before dinner reading her favorite new Barbie book.  Oh Eliana.
Posted by Rachel at 10:32 PM No comments:

These pictures are getting harder to take!  I think William looks like a little boy in these pictures. 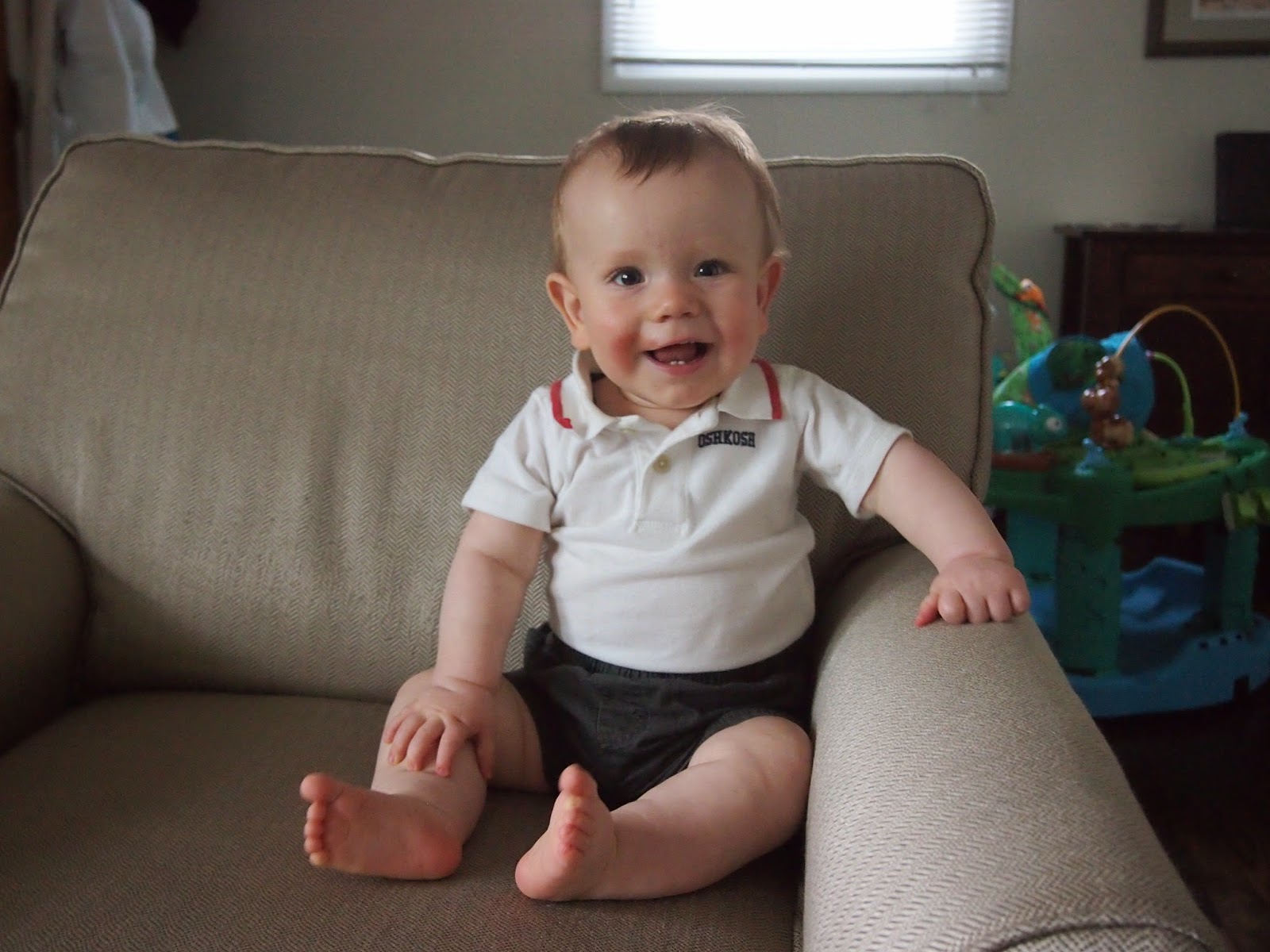 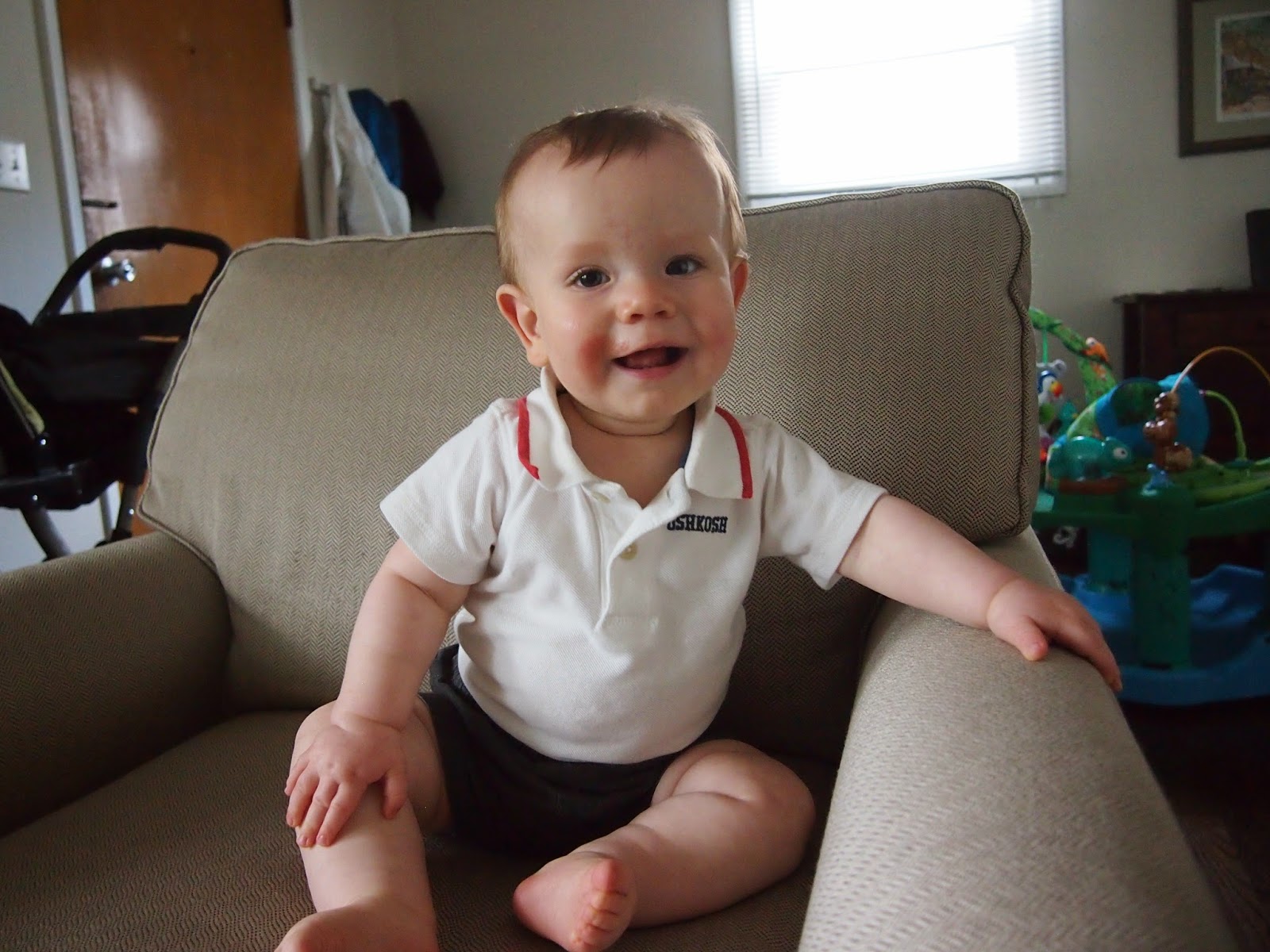 The bathroom scale said William weighs 19.5lbs, but I could hardly get him to sit on the scale, so I don't know how accurate that was.  He still can't crawl, but he does reach all over the place, roll around, and scoot backwards, so he can get into a lot of things.  He is a monstrous eater and likes to shovel in food by the handful.  He can wave, clap, and say "Mama", "Dada", "Shhhh", and all kinds of babbling sounds.  He usually gets up just once in the night or sleeps through the night on really good nights!  He still takes two to three naps a day.  He is just getting over a cold, which made him really cranky.  But today he seemed his usual happy self, so I am glad he is getting back to normal.

Some other pictures we took the same day: 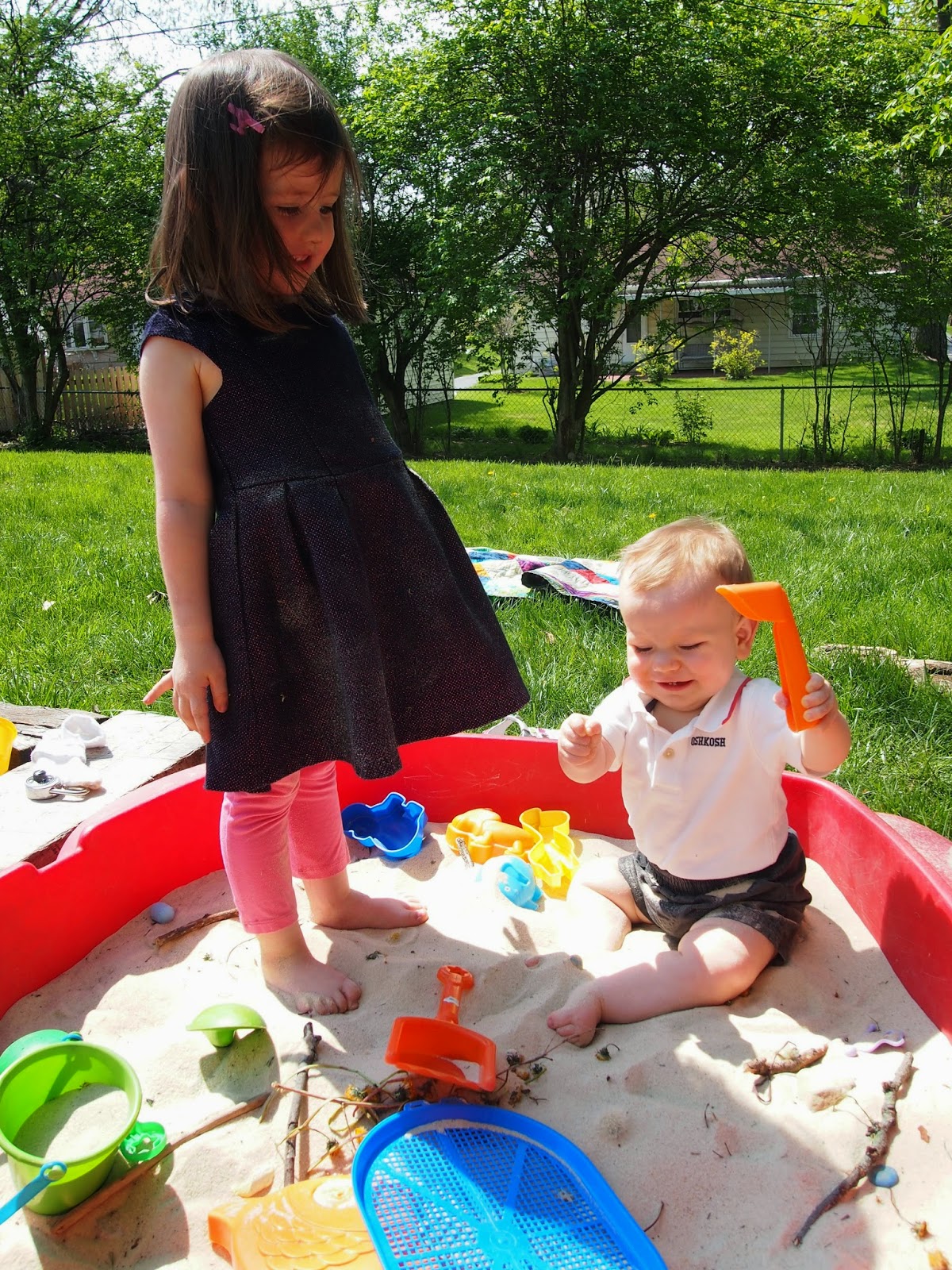 Eliana sometimes really wants William to be a baby again.  She wants to hold him, which he doesn't like anymore.  He no longer will let Eliana do whatever she wants with him and he gets very opinionated.  Sometimes I feel bad for Eliana because she just wants to play with William so bad, and he won't play the way she wants.  Before too long though, they will be playing together I'm sure.
Posted by Rachel at 10:14 PM No comments: